Blog
You are here: Home / Blog / About the Book / Raggedy Ann—A Legendary Doll

I’m a 1960s kid, and I don’t mean a flower child, I mean I was playing Slip n’ Slide and drinking Fizzies all summer in LA. Being so young in the 1960s meant being the unintended guinea pig for products I loved to eat, like chocolate Space Food Sticks, Shake a Pudd’n, chocolate peanut butter buffalo Pop Tarts, and 1-2-3 Jell-O. A favorite game was my Thingmaker, the electric mold that made all things rubbery — and some things rubbery and edible.

I loved the Thingmaker. And Gobbledy Goop, the stuff that came with every edible or inedible Thingmaker product. I don’t think the ingredients in Gobbledy Goop were even mentioned on the package, but who cared? All that mattered was whether there was enough red or green left in the bottle and whether the machine would magically work one … more … time. You’d run out of goop, of course, before you’d ever find out if the machine would last. How many Gobbledy Goop spiders did I consume? I shiver to imagine.

Games in every decade make an indelible impression on us when we’re young. They’re a huge part of our worlds. We don’t think of them much, but we never forget them. Writing 100 Years in the Life of an American Girl I dug up the top toys from every decade and listed them at the start of every chapter. 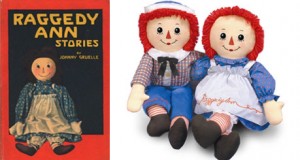 Raggedy Ann – Then and Now

Remember Raggedy Ann? Did you know she was the creation of a writer? Story has it that in 1915 Johnny Gruelle wrote, illustrated and published the The Raggedy Ann Stories after his little girl, Marcella, approached him one day with her rag doll. She asked him to draw a nose and mouth on her doll’s face, and, well, I guess the doll started talking! Raggedy Ann has ended up a legend. One hundred years later she has popular books, dolls, signature toys and even a website.

Some dolls never hit legendary status. In Girlhood in America, Mary, a girl born in Maryland in 1914 in a coal mining town called Big Savage Mountain, gets her first rag doll. She watches her mother bunch up a rag she takes from her apron pocket, set it on top of a clothespin and wrap a white cloth over it, to make a head. She covers the cloth with a square of fabric, cinches it around the “neck,” and lights a wooden match. She tells Mary to watch. When the match is black enough at the tip, Mary’s mother blows out the flame and makes the finishing touches on the rag doll’s head — eyes, a mouth, and hair. Now that is a doll to remember.

The View Across 100 Years
0 replies

BUY NOW
The View Across 100 Years