I interviewed Mary Ann Natly for Girlhood in America in the summer of 2010, when she was 103 years old. A small spritely woman, she was in the gym more often than she was in my memoir class. When I entered her apartment for the interview, she apologized for her stacks of papers and books. “I’m into politics,” she explained.

This excerpt is from Mary Ann’s story in Chapter 1: The 1910s: Chasing Fire Engines. Mary Ann tells about crossing the ocean on a ship in 1912 at five years old, from London to New York. Her family arrived too late to board the ship they were ticketed to take that day in April, which turned out to be fortuitous: they missed being part of the infamous maiden voyage of the Titanic. 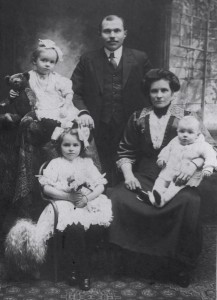 The chandeliers on the ship were so beautiful — huge and glittering. I couldn’t get enough of looking at them. I was served an orange, the first I’d ever seen. It was spectacular. Later, in New York, when I asked my mother for an orange, she said she couldn’t afford one.

When the steamship arrived at Ellis Island, a black man in uniform greeted me by pulling on one of my ringlets. I’d never seen a black man before. I thought he was going to pick me up and take me somewhere, so I screamed my biggest scream. He assured me he wasn’t going to harm me, but I hid behind my mother for protection.

I was a country mouse in New York City, in awe of everything. We lived in one of those houses with stairs coming up from the street and another apartment on top. A doctor lived upstairs, and he was there when the flu epidemic struck. I was eleven. It was sad, people crying all around us, so many people dying. Thankfully, no one in my family died.

At school, I tried hard to mix with the other girls. I would turn the jump rope for them without jumping myself just to be a part of it. I attached myself to people I thought would be good helpers, people who might help me be accepted. It wasn’t working. One day I told my mother I wasn’t going back to school. She thought it would be best for my well-being (and hers!) to put me in a German school, where they spoke German. I had to learn the language, which made learning English even harder. When World War I started, German stopped being spoken at school and I finally started to learn English. Things started to improve a bit after that.

At my next school, St. Joseph’s Catholic School, I finally started to feel accepted. By now I could speak English, and I was much happier. My teachers were some very good nuns, and there were some very tough ones, too. In fifth grade, if I did anything wrong, Sister Mary Jane hit my knuckles with a wooden ruler.

Meanwhile, my mother made sure we looked neat in our uniforms every morning — white blouses and little ties. My shoes were whatever my mother could get. In the winter, they were high-button shoes. I didn’t like those shoes because they had to be laced. My hair was curly and I wore it loose. After school and on Sundays after church we changed into play clothes. In winter, we wore dresses with leggings.

Horse-drawn buggies and wagons filled the streets, but I was never invited by anyone to ride. I mostly traveled on foot anywhere, or rode the “el” (the elevated train, with tracks above ground) when we went farther than a few blocks.

Pushcarts filled the streets, with people selling things like pots and pans, soaps, fruits, and vegetables. I heard foreign languages — Czech, Russian, Yiddish — though at the time I had no idea what languages they were. Women wore long heavy skirts and aprons with designs. They walked together, pushing their carts.

I went along with my mother to buy groceries from the pushcarts. It was my job to carry home the loaves of bread and the bundles of fresh fruit. She taught me how to handle money. After that, on Fridays I got to go by myself to the bakery to buy a big loaf of warm, fresh rye bread. It smelled so good! I would always pinch off a piece to eat on my way home. /…READ MORE in Girlhood in America: Personal Stories 1910-2010.

What’s New About Being a Girl?
Scroll to top