Blog
You are here: Home / Blog / About the Book / What’s New About Being a Girl? 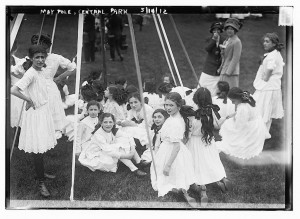 Young girls are vulnerable and aware, influenced by everything around them. They can show a time period more truly than those with more knowledge can.

As a memoir teacher, consultant and writing coach, I’ve seen a fascinating palette of realities and relationships, and I share some of it in Girlhood in America: Personal Stories 1910 – 2010.

Being a girl in the United States has changed so much in the last century. What concerns them changes over time and the culture they are a part of influences them as they grow to help create it.

In ways, girls inherit a different world every ten years. Life is new again and again.

In her story in Chapter 1, Florence Smith takes her first ride in a car, a Model T her father buys from a door-to-door car salesman in 1911 when she is five years old. In the 1920s Julia Murray climbs trees wearing a skirt and bloomers and sits with her mother at the telephone switchboard when she goes to work plugging long cords into a board to connect calls. By 1932, when Helen Gilstrap is riding to school on horseback in Montana, electricity is appearing in more and more homes, something never conceived of in Florence’s time. In the 1940s Barbara Ramrus sees a very different life after World War II. Supermarkets open up around the city, and so do movie theaters, and new neighborhoods are being built just as fast. By the 1960s, girls have a whole new set of interests and concerns.

These different worlds of every decade are described in the girls’ words in Girlhood in America, available now on Amazon, or for your e-reader.

Being a Teenager
Scroll to top